1977-’81: While studying in the oil painting department of Musashino Art University, Hasegawa’s interest in classical oil painting style led him to form a group called the “Painting Composition Research Group” with like-minded fellow students. Also, he began working in the copper-plate etching medium in parallel with his oil painting.

1982-’87: After graduating from art university in Tokyo, Hasegawa returned to his hometown of Sendai but continued to show his work in a rental gallery in the Ginza district of Tokyo, and in the area of creative subject matter, he was influenced by contemporary art he saw in local contemporary art galleries in Sendai and through writing for a critical art magazine.

1988 – ’95: Influenced by contemporary art, he changes from oil painting to painting with acrylic paints and an air brush. This became a period when Hasegawa’s style changed most dramatically.

1996 – 2002: He returns to painting with oils in a style of representational realism. He chooses to show his work mostly in local exhibitions in Sendai. He forms a new relationship with the Shikishima Gallery in Sendai. Shikishima Gallery specializes in traditional Japanese crafts and the gallery’s owner has a profound knowledge of classical literature.

2003 – ’09: This is a period in which Hasegawa holds solo exhibitions on a regular basis, including regular solo exhibitions at a department store gallery in Sendai and in Tokyo and other localities. Stylistically it is a period of a variety of styles, centering mainly in Western-style representational realism.

2010 – ’12: Departing from his style of representational realism, this is a period when Hasegawa searches for his own individual style of painting. To separate himself from purely representational style he introduced clear literary subjects into his paintings. He creates paintings based on a re-discovery of Japanese traditional culture.

2011: First solo exhibition of paintings taking subjects from literature. He uses oil paints to create paintings based on subjects from The Tale of Genji and Tale of the Heikei. Stylistically, his paintings are still classifiable as Western style representational realism, but to this he adds elements of traditional Japanese pictorial expression.

2013: In this year’s solo exhibition, Hasegawa departs from Western style representational realism in favor of a more abstract style introducing traditional Japanese patterns. This is a result of learning from studies of Japanese art history that the categorization of art occurred in the Meiji Period as a result of Western influence and his resulting search for subjects not from painting but from Japanese traditional crafts and other areas. His sources of subject matter change to The Tale of Genji and the Manyoshu poetry collection.

2015: This year’s solo exhibition, influenced by Japanese traditional crafts, Hasegawa take oil paints as a material for craft creation, using the shells used in mother-of-pearl work and gold paint to create his own new working style. 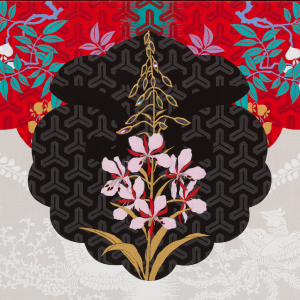